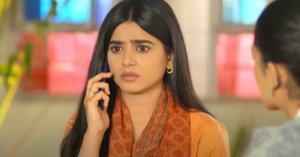 Drama Serial Zakham Episode 16 At the beginning of the year, Areej gets an offer of a maid, so she talks to her brother about it, then Areej’s sister-in-law interrupts her and leaves.

But Areej’s brother gives him permission. On the other hand, Alexander is still remembering Arij’s slap.He threw the glass in anger at what he had hit him in the face and was also drinking alcohol.

And he says, “Sir, you are all right.” Alexander angrily says, “I called you.The servant goes back. Here Areej gets a maid and she is very happy. Here Alexander goes to Areej’s house.

And he says to his mother, “Why didn’t you stop Areej? You could have stopped him if you wanted to. You have forgotten that you are at my mercy.”

And says I need Areej’s phone number then Areej’s friend calls Areej and says Affan is asking for your numberSo Areej cries and says, “Leave me alone, let me live in peace. She talks a lot more. Affan hears all these things and goes home.”

The house is waiting for her mother. She comes home and tells her mother, “I know you are angry with me.”And what I am about to tell you will make you even more angry. Affan’s mother says what happened, Affan says that I have been in contact with Alexander for a long time.

Areej and Sikandar are divorced and she has returned to her home
And I want you to take my cousin to Carriage’s house, and now he’s not married to anyone, so Affan’s mother says, “Son, he’s divorced.”

And she’s been with your brother for a long time, and Affan says he’s not married yet.So Affan’s mother says that I like my son Areej very much but if this happens then Alexander will not leave you, then Affan says that my mother will see what happens.

Will you take the relationship? Her mother says yes, I will try. Areej’s mother and sister were preparing to leave home for fear of Alexander.

So they quietly prepare to get out of here and when they are sitting in the rickshaw, the rickshaw driver tells them that someone is following them on the motor.

On the other hand, Areej’s friend Nazish explains to Areej, “Have mercy on yourself and others.” She was still talking when Saiba’s phone rang. She said, “You are fine.”

I am relieved to hear your voice. Areej says what happened. Saiba, everything is fine. Saiba says that nothing is right here.

He takes her inside and says, “Does my mother know that you have come to me?”
So she says I left that house a long time ago and it is not possible to go back to where I came fromI just came here to see how the person who disturbed the peace of others is doing today. It seems that marriage did not suit you.

Then he calls his servant and tells him to take Madam to the guest room. Meanwhile, Areej’s mother and Saiba go to her aunt’s house in Lahore and as soon as she leaves, her aunt starts taunting her.