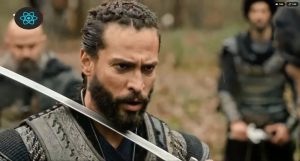 Banujhjak tells Haima Khatun that the women of the two tribes are still angry with each other.Then Haima Khatun calls all the women and urges them to live in unity and finally says that all women should embrace each other.
Hearing this, the women begin to hug each other happily, so much so that the thief speaks and says that in this bazaar we had lost Sardar Jandar Sahib of our tribe and my child had also died.How can we forget this. Haima Khatun tells Chorpahan to keep your name closed, we are trying to establish unity between the two tribes.
And you are trying to spoil it. Then Halima says that all this has happened because of your husband Ural. Why is Islah not here today and why is Aliyar lying injured?Because a soldier close to Ural had captured Islahhan.
The thief tries to provoke the women of the living tribe again, but Haima reprimands him sternly and tells him to get out of here.After that, the thief leaves and the women go back to work.
On the other hand, Oral was sitting on the seat of Sardar.So much so that the pickle reaches him and says it’s not good news, Sardar
Aliar has regained consciousness and is recovering. Now Ural says no problem, he is not able to stop us, Achar says another thing, Sardar.The soldiers have seen the body of the governor and Kurtja has also come to know about it.
On hearing this, Oral gets very angry and says how can you be so stupid.Why did you throw the corpse so close?
“The men of Lajmi Kortja were chasing us all night,” says Achar.Otherwise, they would not have been able to find the body. On the other hand, the man of Vesolis had come out of the prison in Qalachaiser because Vesulis had ordered him to catch Bampsi.There are some other men with him, then they quietly start looking for Bampsey.
Bumpsi was at Hajaturin’s shop, Hajaturin asks why is Bampsi so sad?”I was a prisoner in love, Haja Turin, but now I’m free and I’ll go back to my tribe,” says Bampsey.
Then Bampsi stands up and says let me go now.Seeing that he walks away, Tayu also starts chasing him with his men.
On the other hand, Ertugl and Targat are sitting together in the forest, waiting for the men of Vesuvius, so a soldier comes and says, “Sardar, they are coming.”Hearing this, Ertugal also gets up and starts looking at these men