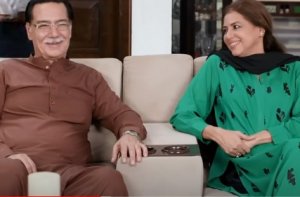 Drama Serial SiyaNi Episode No. 49 Zarbab comes to his father and says why did you give one crore rupees to Faiza Keshowhar
His father says how did you come to know about this then he says you tell me that without you telling me his father gets very angry and says I am your father you are not my father. Be my eldest son
I have done everything with your advice, but it is not necessary that I have consulted you in everything. If you had told Faiza about this, she would not have ordered us. She only wants the good of this house
And he was the one who stopped us from giving him money but that’s why we gave him money without telling him so that our daughter will be happy then Zarbab gets very angry so his father says
That I did not take money from you so that your wife does not insult my daughter, I gave the money myself, but you have nothing to do with it, I have not responded to any of your actions.
So Karan gets very angry with her and she says that you married your daughter with a lot of thought then how come they are weak and mean people then her father says
As the daughter-in-law came out of a small house, the son-in-law also turned out to be very mean, so she left in anger and Zarbab also left. She says that if you also drink tea with us, Nawala will come
Then Nawaz is with him from the heart, then they say why Shaheed didn’t come with you, Mal says, then he is with me, if I stay, Nawaz says that he will always be with you. He is lost in his thoughts and keeps messaging him all the time
Now, since he came to my house, he has free will, he talks to Ajla all the time
This is wrong, she says I have screenshots of your message as proof, her father and brother then get angry, there is nothing like that, I talk to her mother.
She asks him what she wants. Zohaib gets angry and says I am telling you for the last time that no one will contact Ajala and her family the next day.
Zohaib calls Ajala’s sister and tells her about it. He says I got some messages from Ajala. I want to pray about it. She says you ruined my sister’s life. done what do you want what do you want to do
Talk to Ajala
No, whatever you want to talk about, talk to me. What do you want

to talk about with him? I ruined his life. What do you want? He says there are some messages from Ajala’s number. He says Ajala has asked me some moneyThat Bislak immediately thinks of her husband, she runs away and gets angry, then her sister also goes behind her and says that you will turn out to be so stupid, I had no idea.
Divorce my sister right now. He is very angry with him. He came to kill Ajala So they both push him and go home from there then he comes to pick her up from her house so they say divorce Ajala and pay her dowry then this mumani says
If you ask your sister if she wants to settle down with him, she gets angry

And it is said that if you cannot speak for my sister, if you leave here, her mother will be very angry and will stand there silently.