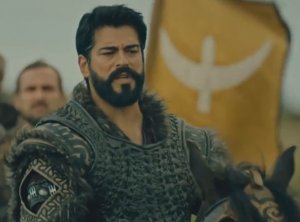 Osman is coming with his friends and Rono Mas lays a trap to trap Usman,

Osman is stopped on the way and says He tells his companions to secure the roads first.

He says to Burhan that you go and secure the roads.

Soldiers are searching the place with Usman

The spies of Haro No Mas are lying in

they attack Usman from the side of Chavar.

And on the other side of the city, Murul Abdal and

some people with him are also being attacked by the servants of Runo Mas.

They fight for a long time and finally they are captured.

Bala and Eagle and Malhoun Khatun and Jer Ko Tai and Ayesha Khatun come in a special dress.

Inside the castle of Rono Maas, they are stopped at the gate.

The guard standing at the door asks them, “Wait,

where did you come from and what do you mean by this?”

They fight for a long time and finally they are captured.

Bala and Eagle and Malhoun Khatun and JerKoTai and Ayesha Khatun come in a special dress.

medicine for the treatment of the injured.

companions to attack and they all attack together.

And after a long time, many of the soldiers of Ro Numas are killed and he flees from there,

and on the way, Musa and his soldiers also confront RoNumas.

And he kills all of them and escapes from there when Usman sees Mosa and his spies.

So he says that it is necessary to perform their last ritual first, he puts his sword down