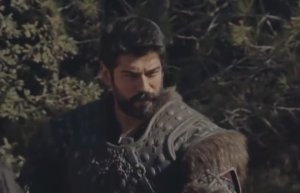 In the drama Serial Usman Cry Episode No. 104 Episode 2, you will see that Usman takes his friends out of the cave.

And Bala also reaches there with his soldiers looking for him. Uthman heals his companions and asks Bala.

What is the city like? Baala says Malhoun has managed it. Baala says your place and Han has been given this responsibility.

Malhoun says Usman is very good. Malhoun asks what will you do now. Usman says now we will attack Marmara Jak first.

They will take that place away from Olaf and then they will do more. Bala says he is preparing to attack Yeni city. Osman says I am leaving.

They will definitely try to destroy the city, but I will not let that happen, Osman says, but you will go to your tribe for treatment without being seen by anyone.

Olof and Kinta make a plan together about how they will attack the city of Yeni. They are very happy.

Olaf’s two satyrs say, “I will beat Malhon, and with such punishment I will cut off the fingers of his hands.”

I will kill them very innocently. They are planning the attack when Usman comes to Binder and says you will kill us and take us away.

At first he doesn’t believe, then he believes. Usman and his companions hide in the place of Saman.

Mr. Binder goes to beat him, there the soldier says, “Stop, what is this?” He says, “I have food that you people demanded from the prisoners.”

So the soldiers say that you can’t go, Oluf’s brother will come soon.

After that, Kunta reaches Usman’s palace, where Mata has already prepared.

Malhoon is very worried about the attack, she says don’t go, when will they attack the city, she prays what will happen to Usman

Osman attacks Jack with a beating and all the soldiers and Binder fight him.