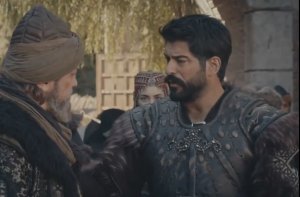 In the episode No. 104 of the drama Seril Osman, you will see that Olaf is spreading the news of Usman’s death.

He is very happy that Uthman is dead, Olof calls his two companions and says spread the news of Uthman’s death.

And he leaves some of his soldiers near the cave to take care of them so that no one can rescue them.

Malho says to Nabala, look for Usman sahab everywhere, search under every stone and Baala says ok, says to Akimore.

Everywhere in the city, the number of soldiers is so loud and loud that Mata comes and tries to listen very carefully.

But before he could hear anything, they all hurried away, and Olaf was making plans with his legs that Uthman was dead.

Now the city will be ours. Olof tells his soldiers that no one has spared anyone while attacking the people of Yeni.

If anyone shows mercy, I will kill him with my ax after the war.

Akimore says ok, he calls a Diwan in which all the chiefs come, they are all sitting, Orhan comes and he sits in Usman’s place.

So some of the leaders think this is bad and Bayander says, “Where is Usman Sahab, why was he not told about it?”

So Han gets up from his place, then everyone starts to get up, then Han stops them with a hand gesture, they all sit down and Han says.

Byander, my lord, I want to shave your head first.Bayendra becomes silent, Uthman takes his soldiers out of the cave, and Bala also thanks Uthman and him.