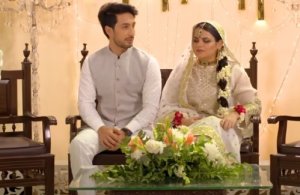 Drama Serial Mushkil episode number forty-fiveFaraz’s uncle calls her son Zowar and talks to him about Anila and him, he says yes, then she talks to Anila’s mother about it.

So she says yes standing up, everyone is very happy then Zwar’s mother remembers Samin then Hareem was also there and she gets angry in her heart after hearing about Samin.
Then Hareem’s mother-in-law thanks her by sitting next to her, then she talks lovingly and says that it was my duty.There, Samin’s paternal uncle is very sick and she asks to call Samin.
Arif is also sitting there and his mother i.e. Samin’s uncle tells him to take care of Samin. Faraz is sitting there thinking about Samin.

Just then her Phoo Phoo comes there and starts explaining to her that don’t trust your eyes, talk to her once, you might be deceived.
So still if you want to leave her then leave I won’t say anything again she walks away he thinks about it
The next day, Faraz goes to Samin’s house, but before that, Hareem informs Arif about Faraz’s arrival, so he makes an excuse and goes out. He opens the door, and Faraz is standing there.
So he entertains her with his words and disrespectfully throws her out. The next day Zowar and Anila are getting married.
But Samin is not invited, Hareem also comes to the wedding, she comes dressed plainly, when her mother-in-law asks her, why are you dressed plainly today, she says, “Mother, I am a widow.”
When she came ready, people would talk, anyway, no one likes to touch my clothes at all. Faraz was listening to all this, then he gets a call from the police station and they say that we have got some evidence.
So he is very happy and says that whenever you call I will come right now my sister is getting married but when you say I will come then he says ok then he hangs up.
At night, Hareem sends the wedding picture to Samin and calls him and tells him that no one has invited you to the wedding.
Why, because of Faraz, didn’t I say that I will get you out of here very soon? Look, I have fulfilled my promise. Hearing this, Samin gets very angry and hangs up the phone in anger.