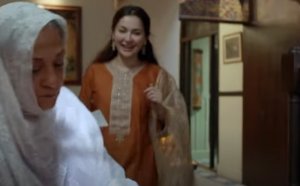 In the beginning of the drama serial Mere Hum Safar episode number 28, Sofia Jalis and Khurram are sitting and talking when Hala comes and looks, then at the same time Shah Jahan comes and says to Hala,

what are you looking at? Mir is an old lover, why are you ruining Samreen? Hala says no, I can’t do this. Shah Jahan says she is repaying all the favors. Hala goes to her room and thinks her uncle.

How they used to be happy, when she comes out, Shahjahan is bringing tea And she says to Hala that go and touch grandma. Hala says to grandma that my health is bad, so I should go to Dakar. Grandma says yes,

call Hamza and tell him to take you to Dakar. Shah Jahan, who is standing next to her, says that why will you say to Hamza that I am not taking her, then grandmother gives permission. Shah Jahan comes to Khurram’s house with Hala.

She says that the bus will go a little further, Shahjahan herself stops at the stairs and sends Hala to Khurram and quickly calls Hamza that I came to a friend’s house and he is not at home. My health is deteriorating

It is very close to your office. You can come to pick me up. Hamza comes quickly, so Shahjahan says that you will not leave my hand. Shahjahan takes Hamza and stops at Khurram’s door. Khuram is talking.

She says that you have married yourself. I came here because of your hatred, but when I saw the truth for myself in Samreen’s eyes, I changed my mind. Hala says that it is not true.

The marriage with Hamza was just an accident. Hamza gets angry and says seeing all this, now she is surprised to see that Hamza, Hamza and Shaujahan are leaving from there.