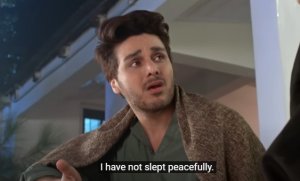 In the episode number 28 of the drama serial Mere Ham Nishin,

. Now, I will not allow this to happen with Hasan. What should I do?

I will do what Hadi wants. I know what kind of people they are.

People should have a relationship with each other.

Hadi is sitting next to his friend, then he says to him, “Hey,

in the environment in which you have played, you are only suited by Imama,

then Hadi says, then me.” If you had said

Hadi angrily gets up and leaves
.
On the other hand, Beha would say to Khajastha that apply mehndi quickly,

because now we will only go to get graduation,

you will also have to wear clothes of my choice, so Khu Ajastha says no,

let me stay, I want to go home. Beha gets angry and says that what do you want,

you can leave Hadi and be happy, so Khu Ajsta says that I only know one thing that if I do something wrong,

Khu Ajsta will never do it. Not everyone will be able to get out

Beha says just do it and I have also ordered clothes for you.

You will wear my choice. Hadi goes to her father’s office and says that you have been on emergency duty all night,

why didn’t you go home? Dude says yes duty t and you don’t need to say father and I don’t talk to anyone you go from here.