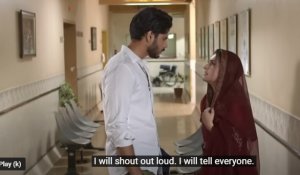 In the drama serial My Neighbor episode number 29,

Drakhzai stands in the exit and then he comes and sits on the stairs and is very tired.

When Yashan sees, she comes to Drakhzai and asks if Drakhzai is still asleep or not.

Moray saw a dream and then suddenly opened his eyes, Moray says what dream did he see,

Ever since Khajastah went to the city, she has not been able to sleep properly.

Darkhzai says, “For the sake of Allah, just call Khajastah back. On the other hand,

Khajastah is very scared, and Ahsan comes and says, ‘Be careful.

‘” If you even mention my name, Khu Ajasta also gets very angry and says that I will tell you what you have not done.

You did it, you tried to take my life and killed your own brother.

If he had died, there would be stitches on Hadi’s head.

It was your plan and Khajastha was already there.

Hadi’s mother Sabiqa says that you are not looking.

He has only four stitches. Shahyar says that’s why he kept the night function because you are at night.

Hadi says very angrily, that’s enough, Baba. Even after I found out why you called Khajusta,

only then did this happen to me. Shehryar is very surprised as to who has done all this.