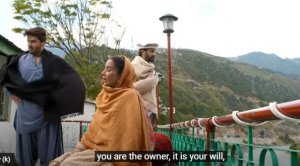 In the drama serial Mere Hum Nishin episode 27
,
Maurey says to her son Imrooz Khan that it was

good for him that you would avenge your uncle’s

blood but you avenged one blood from many people.

Poor thing and you yourself were oppressed and this

house and mansion was already oppressed.

What did you do? Did you oppress them too?

If you had done that, I would have understood,

but you did it. Listen to your mother. takes

And he comes and says to his Imrooz Lala that you have not done any mortal thing.

If you had so much hatred for the murderer, you would have punished his daughter with agony,

but you yourself have fallen into trouble.

assured his love And why I punished life for him Today weeps here,

city man He hears that Hadi Khawa does not want to marry Jasta, so he says angrily

Call Hadi, what is he doing now? Hadi’s mother says that you should stay

Shehryar fights with Hadi and says, “Get out of my house, then Hadi also comes to me.

” Ki’s mother fights with the city man And she says stop Hadi.

Hadi is leaving the house. Shahryar says let him go.

Hadi’s mother says you are doing this for Aima.

What is it and I have never considered Aima as my brother,

I have always considered her as my daughter

You know this too. Hadi’s mother says that I don’t understand anything. Just stop Hadi.

He is going to the city. He says let him go.