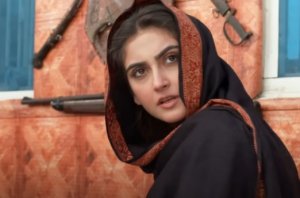 In the drama serial Mere Hum Nasheen episode number 23,
Khajasta is sitting in her room crying and Khil sees how Darkhzai beat her and
humiliated her in front of everyone. How will she go back now?
Darkhzai comes out of his room and sees Khajastha sitting there.

He sees how Khajastha slapped her in front of everyone.

On the other hand, Imrooz Lala’s wife talks to Imrooz that you should
leave Khajista out of the city forever because who does not know the anger of Darkhzai,
lest he kill Khajista. Bahram Khan has to give it in return.
Imrooz Khan says I have been listening to your nonsense for a long time.
Don’t say a word beyond that. His wife becomes silent.

Imrooz Khan comes out and sees Khajasta and Darkhzai fighting.
Darkhazai says you didn’t do well by slapping my face. On the other hand,

Imama says that men and women have equal rights

If I had known that Khajasta’s family was so low-minded, I would never have done it.
At the same time, Hadi comes home and goes back after listening to Aima’s words.
Suno Miri doesn’t stop, so Aima goes and grabs his arm

You will have to listen to me, then Hadi stops. Aim
a says you are still angry with me.
Aima says Hadi, what should I do to make you agree?
Fai Hai Hadi leaves then Aima says where are you going

Tell me, then Hadi says to take Khajista, Aima sits there and starts thinking,
then Hadi’s brother Hasan comes and asks why are you worried.