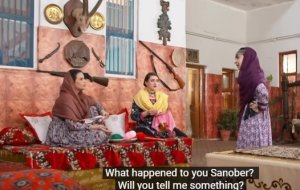 When the investigation will be done, only my two children will be trapped. Khasan does not know everything, he does not tell anything. Now all the children will be questioned again, then the truth will come. Aima says that Kho Ajasta’s friend Beha talked about cigarettes. He may have played this game because of the result, ask your uncle warden to remove Hadi’s number there and your two nine children will be cleared.
In the drama serial Mir Ye Hum Nishin Episode No. 35,

Shanze calls Sanobar and says that you sew well.

Don’t do it, Khan has forbidden me to work, neither do I do it myself, Sanubar says.

When she has gone to the city, why did you let her come to see her? Now what will she do with you?

Shanze says nothing is as we thought. Khan really considers her as his sister.

Sanubar says you are not going. Nati calls his trick ShaNze

She won’t do anything, Darkhzai is going crazy here, her father was telling me,

I think she will get married this month. I have become crazy for her.

Sha Naze says what are you thinking? Look, Khan has brought it himself.

Shanze says see how it will look, Sanobar says yes,

then you will know where to put the stitches.

And he spoke there, he knew that his voice would not be suppressed.

Shehryar says that if you know the truth, it will go away. If not today, then tomorrow.

So Sa Beqa says, son, what are you hiding from you? In the still,