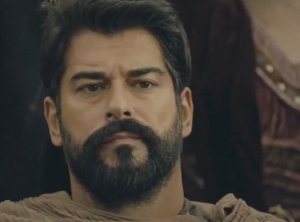 How quickly did USman end his Jirga? He was sent by Noor.

He saw the commander of weapons and said that the life of our Sultan is in danger.

And they get ready in a hurry, and when they get off the boat at Constantinople,

Noor is waiting for them.And he quickly leads all these soldiers to a safe place,

another Turkic shaman watching them go.

And he is very happy and says, “Welcome, OSman,

who does not want the Mongols to be diverted from his path.”

they spend the night in a secret place and in the morning when it starts Tamasha.

So all the people of the state are invited so that they all can enjoy it.

There are many people who watch this spectacle. Many ray spas sit in separate locations

Burhan and many other soldiers sit in separate places.

And all are preparing themselves for the battle.

Osman’s eyes are on his side standing with the Sultan.

And all are preparing themselves for the battle.

Osman’s eyes are on his side standing with the Sultan.

As soon as he gets the hint, he goes in for the attack.

Osman says that this game is played with the lives of innocent people.

Well, this is a game. Usman Burhan hopes that Ghardar has gone inside.

Many prisoners are brought in.

And at the same time, a man started shooting an arrow at the Sultan without aiming his arrow,

so Burhan quickly shot him.

And USman and Bohan rush to the field, they are fighting very fast, USman is seen by Sultan.

Usman sees a Mongol trying to kill the Sultan.

And that Mongol dies and USman says make way quickly Burhan and another soldier make shields for their swords.

And USman beckoned him and went up to the Sultan and said,

come with me quickly, but the Sultan did not agree, then USman pulled him by the hand.