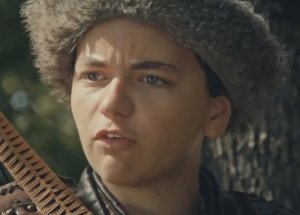 In the drama serial Usman Corulos Episode No. 100 Part No. 2,

you will see that Usman says that there are many enemies, the war that we have waged.

Burhan comes to Uthman and says, Uthman Sahab, I have brought him, he will go as a messenger.

And he will deliver our message,

then Uthman says ok and gives this messenger one death and to be careful,

our enemies are spread everywhere, so we have to be very careful, he says.

you go he is going with his two soldiers.

So on the way a woman with a very strange appearance stops them,

they ask who are you, she says I am your death, they get off the horse and fight him.

It seems that bloody woman kills them very quickly

And when she searches the messenger’s pocket, she finds it dead.

His soldiers say, “Sir, this place is not free from danger, so they do not want to go.”

So Ruhan says that a soldier’s strength is known only when he faces danger.

So let’s go to hunt because they are all spas and there are already hunters sitting in ambush as he hunts.

So those hunters quickly attack them and many soldiers accompanying Rohan are killed and capture Rohan.

And he oppresses her very much. He cuts off the fingers of her hand. He is still oppressing her.

Uthman and him come.

And all of them together attack the Shikas and kill them, and Uthman says, “Whoever will raise his hand towards me or towards my family.”

I will shake that hand and scream as loud as you can, your voice will not be heard by anyone here.