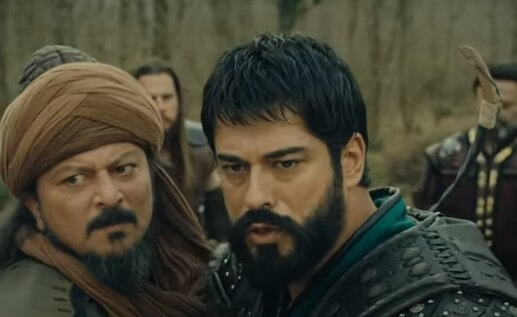 At the beginning of this episode, Eagle Khatun comes to Mehlan Khatun. Mehlan Khatun is talking lovingly to her child Rohan.Eagle serves as Mahlan Khatun’s special adviser.The lady asks the eagle woman if you have brought good news for us.Eagle tells Mehlan that

Saljan Aman was just saying that the birth of a child is still a little late in the house of Bala Khatun.Mehlan tells Eagle that Balakhatun may still have a stomach ache.The Eagle woman tells the Mehlan woman that we were thinking the same thing.But the upper

lady was lying on the ground due to labor pains.On which the women of Saljan Kai tribe have reached the woman above with hot water and clothes.Don’t worry about the lady above.Saljan Aman and other women of the other tribe are with the upper lady and the

process of childbirth will be completed soon.And Allaah will give us good news. The eagle woman is happy to hear the news about the lady and tells her spirit to be happy now.Your brother is coming and insha’Allah now you will be two brothers.And your brother

will be as healthy as you. Saljan Aman asks women to place a pillow under the upper woman’s waist so that the baby can be born easily.