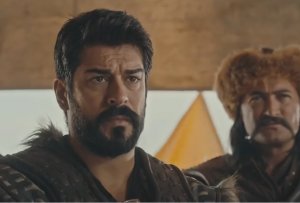 At the beginning of the drama serial KoRoLos Usman Episode No. 108,

you will see that Binder O says to Katam Sahib that Usman will die now.

Because he has abducted my wife Ali and now what I will do with him, Usman will see and he will have to pay the price.

Oktam says Bayinder Sahab just ahead of him and don’t say anything. Meanwhile, Oktam’s wife Bengi Kha comes and says

Bayinder is saying right, Usman kidnapped my daughter on her wedding day, he did not treat us well.

Now we will bring back my daughter. Byender says she is not with me. My wife has been taken away on my wedding day.

So O Katam says Bayendra, she is not your wife, she is my daughter and if Usman does not do well, I will also go to take her.

Bengi Khan is very angry, she says Byender is right, we will bring him, so he tells all the soldiers.

Come on, Bayinder also seems to be going with him, and Katam says that you will not go with me, and when Katam goes to Usman’s tribe, the soldiers stop him.

O Katam said, get out of my way and do not force me to shed the blood of my brothers.

Hearing the sound of noise, Malho Na Kha To Na comes, she stops the soldiers and says, “Leave the way.”

Bala says yes, you kidnapped my daughter on her wedding day, why oktam sir, you have been kept ignorant of the truth.

If you love your daughter’s chicken pox and Aktimore very much, then the master says with great surprise.

That Bengi Khatun just starts to fight Bengi.In the meantime, Alchichak says stop, then we will see

On the other hand, Byender says Hussain will not have to do anything with this Octam. Byender is very angry and Sultana says

That Mr. Usman will now have to accept my words