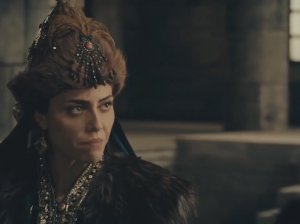 At the beginning of the drama serial Rolo Usman episode no. 106 part 2 you will see that all the soldiers are happy.

Jeer says to Tai, I used to say that Gat will not come without need, so they have come, but Gat comes with a dream, so he thinks about Usman.

When asked how Targat has come, all the soldiers run away and meet Targat Bay, then Targat talks to Usman.

What you did with me was not even worthy of death, Usman says, we have fought many wars together and seen very difficult times.

But when did the one walking in the path of Allah change his path for the sake of a fort, he did not understand.

Or who did not kill me. Uthman says that he did it because of Katam Bay’s sacrifice. Targat says, “How little was my sacrifice?”

Because of this, I have lost my clan or my wife and my child too. Usman says very angrily, “Yes, it was too much.

If the path is clear for you, Uthman says, the paths of those who walk in the path of Allah are clear, but the path is gone.

Asma-Salta goes to Nither Gatbey and says that you are also sensible, I want you to work with me and I want to see you as a good leader.

Turgat says my rift with Uthman bhai is necessary but I am not ghardar. Salta says no. Do you think about the time to come?

that Uthman is a rebel and will be treated as such, you don’t think you want to choose

I want to see you together with me, but Gat shakes his head, then Sultana calls Farik and says that we both have the same goal.

That is why we need to work together. Sultan does not say that I want to respect you.

When everything is equal, then I will bend, it is not possible, says Sultana, your life is between my two hands.