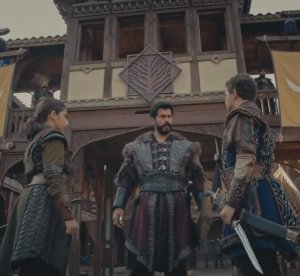 In the beginning of the drama serial “kuruLuS Usman” Episode No. 103, Part No. 2, he goes to the tribe of Targat Oktam and sees that

Some other chiefs are there but Gat says why are you all here Dengi Kha Tun says they are here looking at Oktam’s clan.

Because Oktam is not here, Gat says they will be under my supervision too. Dengue woman says today is the day of judgment when there is no judgment.

After the decision, the woman goes to her tribe, that is, Olaf also goes to the tribe of Usman in the city to hear the decision.

Dengi Khan looks at Olaf very angrily and says that now even the murderers will be judged. Olof starts going to Usman’s room.

So Burhan stops him and says you can’t go in with your weapons and Olaf starts to reach for his axe.

So all the soldiers standing there take out their swords and their spears too. Olof looks around and then puts away his weapons and Olof goes into the room.

And he says to Kanta, where is the woman, and where is Usman?While he is talking, the door opens and Oktam and his daughter are brought in and Usman Sahab also comes.

They tell everyone to sit down. Olof says that Nata is sick. Osman says that she is being treated. Her wound is still deep. Osman says.

You will be a witness if this is not the case in which the daughter of Octam is ordered to be exiled for five years.

And Oktam Sahib is sentenced to be hanged. Olaf and Usman are leaving from there, then a soldier comes and tells them that the soldier who was going to sleep was not taken.

They are attacked and all killed. Olof says I can tell where they must have gone. They all head into the forest.

So Olof says there are signs on this side then Osman stops he says Olof you are going to ambush us.

Next article The Legend of Maula Jatt 2022