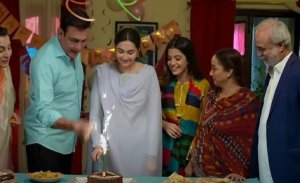 Drama Serial Kesi Teri Selfishness Episode No. 6In the beginning of Shamsher goes to Mehek’s house and says what should I do now talk to this lock then he goes to the next door neighbor.
So he says what is the matter then Shamsher says where have the smellers gone then the neighbor says I don’t know then Shamsher says I am very angry shut up tell me where the smellers have gone
So the neighbor says that I really don’t know anything and it’s a good thing that those people left here, even if I knew, I still won’t tell you what you will do more and more. What can you do?
You do what you have to do now, then he leaves from there, Shamsher also leaves from there angrily, on the other hand, Mehek and his family go to their relatives, they are very happy.
And they say that now this house is also yours and anyway if Rida and Mehek stay with me then I will be happy. Tells about
After that everyone goes to their room then Mehek goes to her father and tells him about Nada’s fee.So her dad says don’t worry just focus on her studies Mehek says Nida’s exams are starting next week then her dad says its ok

Now you both concentrate on your studies now no one will bother you here ok let’s go now when Mehek leaves her mother says our daughter is so strong I hope she can handle herself and all of us. will take

Meanwhile, Shamsher goes to Mehek’s sister’s university and asks about her new house, but he doesn’t get any information from there, then he goes and sits in the car. Whatever you have done to them
They were about to leave the house, so Shamsher got angry and dropped his friend from the car and left there himself. He comes home worried
So his father calls him and says why are you so worried can you tell me what happened then Shamsher says Mehek, Shamsher’s father knocks him and says that Mehek’s house is locked and something from the university too. Didn’t find out
Even the university didn’t find anything so Shamsher is surprised and says how do you know then his father says that the principal told me all this then Shamsher leaves from there.
At night, Shamsher is looking at Mehek’s picture, then his mother comes and says, “Let go of stubbornness.”
So Shamsher says I can’t leave I love her and at any cost I will find her whatever happens Mehek’s family is celebrating Mehek’s birthday and is very happy.
The next day Nida gets ready to go to college and wears a gown and goes to college where Shamsher is already there. He sees Nada and gets out of the car. Nada sees Shamsher and runs inside and calls Mahek. And tells him everything
And says I am very confused while she is talking teacher comes there and sends her to class then Mehek tells her baba everything then he says I have to go then Mehek says no. BABA He would not have recognized him
She is wearing a gown so her dad says ok but I am worried there Nida leaves the paper empty and dodges the sword and leaves and comes home.
She comes home and tells everything. Meanwhile, Shamsher doesn’t eat anything, so his friend says that I am very hungry and mother has also ordered. An aunty cooks at home, which is very good. When the food comes, His friend gives him a box of food
When the food arrives, his friend gives the food box to the person who came from Mehek’s house, then Shamshir recognizes the writing of Mehek and takes out the address of the house from where the food box came.
came and then reaches there and knocks on the door when Mehek opens the door she is surprised to find the sword in front of her.