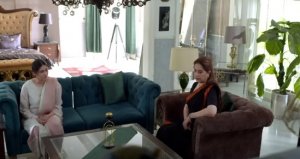 You have to do something else, arrange something for the sword, they say, I will not hear anything about my son.So they say should I understand that you have accepted this girl then they say I don’t tell anyone my decisions.

So they say ok but you have to do something. Farwa is thinking about Mahek and her father calls her.And she says what happened then they say it will happen I have talked about Mahek everything will happen they will expel this girl

You should have thought about this before marriage for the wedding, now what is the use of doing this wedding after clashing with your father?
Then Shamsher says that earlier life would have been destroyed, I understood something, well, what happened is done, now you go and talk to Mehek.
Her father was in the hospital, the whole family is very sad and Mahek is the most, so please go and talk to Mehek so that his mood will improve a little.
Then they go and go and talk about Mehek’s wedding, she doesn’t know anything about this wedding, then she says I don’t know if it’s true.
What a lie, but this is not Valima. On two nights, Shamsher comes and he gives her a mobile phone.Then she talks to Shamsher about Wilme, Shamsher shuts up and leaves, next day she and Shamsher go to the hospital.

At Mehek’s father, they are very happy to see Mehek, then Shamsher comes there and he tells them that it is not right.
You say that we will give you money very soon, so he says that you don’t need to give me money.And you don’t worry about Mehek, it’s totally safe, Mehek’s mother and Rida are very happy with Shamsher.