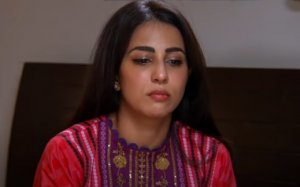 In drama serial Hubs Episode 11, Ayesha is at her mother’s house. You have not come,
how long will you come? Ayesha says I am coming now. Ayesha’s mother says tha

Come on hurry up your mother in law is calling so we will drop you home
Ayesha’s uncle and her sister Bano and Zoya and her mother are getting ready to drop
Ayesha home they are all ready to go to Ayesha’s house. So they leave, they all sit in a taxi and
when they reach Ayesha’s house, the taxi driver says three hundred and fifty Ayesha’s mother argues.

After a while Basit comes and asks what is going on here.
Ayesha’s mother says that they have to give money.
Basit says you guys go Ayesha and everyone else leaves.
Ayesha’s Phoo Phoo is called Bobby.
She takes out the sweet and
starts to open it to Basit but the sweet falls on Basit so Basit gets angry and leaves.
Zoya says let’s see your room.

So Ayesha takes them all to her room Ba Nao says wow
Ayesha your house is like a whole palace everyone is very surprised
and happy Zoya is very surprised to see Ayesha’s clothes and says Take me in a suit,
I don’t even have a suit to wear

So Zoya takes a suit, Zoya wears the suit to Ayesha’s party,
Basit says who gave this suit to Zoya, it was for Ayesha, Basit’s mother says,
I wonder when I will get it. has been done