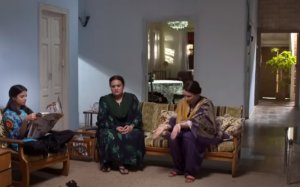 Drama Serial Habs Episode No. 5At the beginning of the year, Ayesha comes to the hospital to see Bano and says to Bano, “How are you?”

And Ayesha says that Talal is not unfaithful, while Zoya comes back home, then her mother says how did you come back home so quickly?

So Zoya says that Ayesha had come, so she came. Basit comes to Zoha’s house and talks about marriage with her father.So her father tries to explain Zoha, then Zoha says

When I told her I had to go out and read, she didn’t believe me, so she got up in a rage and left. When she came home, her mother said that she would talk to Zoha’s father.

So Basit says you don’t need to interfere in my affairs, I will do everything myself. Basit is crying remembering his parents’ words.

When they were separated in her childhood and her mother had left her then Banu’s mother comes to Banu and says”Eat food, why are you angry with me?”

So Banu says just do it, you go away, I don’t want to eat, Basit is sitting in his office, remembering Zoha’s wordsSo she gets a call from Zoha. She says you must have got my answer. You yourself said that you should not waste time thinking.

Sauri can’t live her life according to anyone else’s wishes. Ayesha comes to Basit’s office and talks to him angrilySo Ayesha gives him the file and leaves. The owner of the house comes to Ayesha’s mother and asks her to pay the rent or else vacate the house.

And she says, “Knock on the door of the house of Banu, and tell her, ‘Give me the money.On the other hand, Basit’s mother’s phone rings. She says to Ayesha, “Come and talk to my Basit. Her phone is not ringinWhen she wants to talk to you, Basit says that the office time is over. You go from here and then Ayesha comes back home.

So her mother says that if she has brought money then Ayesha takes money out of her purse and says that it is an advance and will be deducted from her salary.