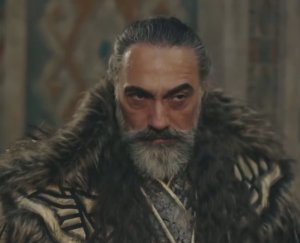 At the beginning of the drama serial Yel Daastan Episode 6 Part 2 you will see Akiz crying and telling Batu Ga.

Why didn’t you kill Alpago Khan who left two small children without a mother and father, Ekiz says crying.

I will tell you you are hating. He says ok you hate me. Telling him, he takes her towards a tunnel and on the way there are some pictures on the wall.

You are very bad, how dirty you have made my pictures.Alpagu will tell you from his palace that he is coming towards the room

And he says tell me where Alpago is. He opens the door of his room. Then Kaya comes and says my wife, then Alpago goes back.

I am very proud. One is my brother and the other is a two-headed sheep who helps everyone and feeds the hungry.

I am going, you can bear it till I come, he says yes, I will

Akiz and Sarma and Yazman walk from Yes, they go straight to Dagh tribe and meet Chol Pan.

Akiz says whose seal is this. Akiz sees a map then Cholupan says this is my father’s seal.

Akiz asks if you sent it to a pigeon, then one of the maids of Chulapan says that we don’t send any message to anyone by pigeons.

We use shaheen. Ekiz is surprised that the talisman is not the one who seduces women. Ekiz is searched in the palace.

Akiz Nai Akiz and Sarma and Yazman go towards the tents set up by La Mir Baig and in the meantime Timur Tegh also comes there.