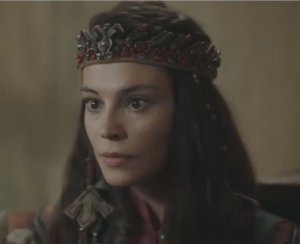 In the drama Serial Yeel Daastan Episode No. 4 Part 1,

you will see that Akiz is taken prisoner and

tell him who attacked her, she keeps silent, then he beats her and says.
I won’t leave you until you tell me. Akiz says untie my hand.

He is hitting the aces so that he will come and he has a diamond in his hand.
He hits him hard on the head and he falls down, then he tells Akiz that there is a tunnel here which is blocked by Khan.

Akiz says then how did Khan know, Batuga says only my mother and Gok Khan used to go to this tunnel. It is

Keyes and Batuga are talking and he makes the soldier come to his senses and he starts beating Batuga.

So Akiz quickly kills him and he dies. Only then will he tell Batuga that his brother Taimur will find him and come there.
He takes Batuga from there and tells that this captive girl saved his life Go Ka Khan’s wife Al Waija says bring these captive girls.

All the captive girls of the Dag tribe are brought in. Alu-eja says that they will lose their faces again and again and they will be dealt with accordingly.

All the rest of the girls open their mouths comfortably, but Akiz does not open his mouth,

he loses his mouth by force and Alwaija looks at everyone’s face and says.
That she should be given a cloth of this color and takes them to the kitchen and starts sleeping and says that when I say get up, I mean get up.

If I say sleep, then sleep will happen. She leaves them on the table in the kitchen and leaves.
They get into a fight and Akiz is again imprisoned and Akiz begins his work of digging a tunnel.