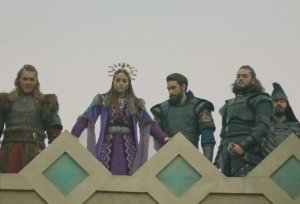 In the drama serial Da Sathan Episode No. 3 Part 1,

many women of the Dagh tribe are taken prisoner and brought to the palace,

including Akize Khan.Ekize’s sister says that now when will I be freed from prison,

then Ekize says if you don’t trust me, I will do something to bring these women to Gok Mahal.

has to go Gok Khan’s brother also reaches Gok Mahal with half of his army,

a man comes and informs that Bala Mir Beg has come,

And Gok Khan’s son asks whether you have come here to take possession or to visit with so many troops.

There is a relationship, this also has to be told, even though Khan’s son says it

He tells the gatekeeper to let them in as Akiza and his many followers are brought to Gok’s palace.

So they are stoned and called the rebel girl.

The rest of the girls are kept apart and Akiza is taken to a separate cell by the soldier and beaten a lot, she says.

If you have not resisted then open my hands and then I will tell you but you cannot do this because you do not have enough courage.

The soldier gets angry and tries to open it. He stops and says