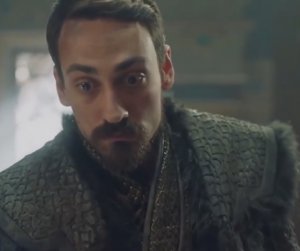 you will see how Akiz Khan shot him with an arrow and took away his belongings.

Akiz Khan goes to his tribe and is very

She happens and tells ChoLaNa khan

That Tere Bha Njhe Batuga was taking the relationship of Bila Mir for his daughter,

then I laid a trap and he got stuck in that trap. They were stopped on the way.

in his feet Mir arrow hit his target. I don’t know if he is dead or still alive

Cholan Khan gets very angry and says you have ruined my plan,

you have not done what I wanted, so as a punishment you have to kneel down with Sardar.

Bill will sit down and ask for forgiveness, then Akizhe Khan says I will not do that because

I have killed my father’s killer.

the one who made the Dagh tribe homeless, tell me, Cho Lan Khan,

is it not true? Cho Lan Khan says yes, it is true,

but they I wanted to take revenge on my own account,

so Akize Khan is sitting alone

On her knees and Cho Lan Khan puts her foot on his hand and says why did you do this without my advice.