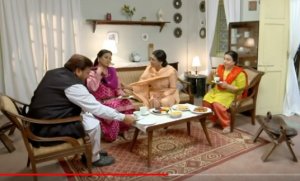 Drama serial Churah Episode No. 25
Zohia goes to work everyone greets her then Zohia’s mother is working at home then Nahla comes there and starts entertaining them with her words then Zohia’s mother starts crying hearing this then she says you worry. don’t do I will prepare Zohya very well then Junaid comes and he says what is the matter you look very happy then she says aunt is coming today but she doesn’t tell him the real thing Junaid says ok. There, Shireen calls Nahla’s father, but he refuses, instead scolds him and hangs up the phone. Hearing this, Shireen sits on one side and starts crying. Nahla tells her aunt about Zohia’s relationship. If so, she says that she understood well Just goes to see what’s going on then Naila says let’s go down then she says ok let’s go down then Zohia’s mom tells Junaid about Zohia’s relationship and asks him to stop it then he gets upset and he He says that he will come early. He comes to see Zohia in the evening for a relationship, so he asks to call Zohia. So they tell them that Zohia has not missed work. Junaid goes to a court and prays that Zohia will find him. There the relatives talk about their son’s relationship. At least answer, then Zohya comes there And angry relationship broken Rajab she sees so she was watching a now and pointing to the moms in front of her everyone feeds each other sweets where everyone is happy thinking about Junaidzoya. There Zohya was sad and you did not give me and did not give the right to my happiness in your happiness There Naila’s aunt tells her son about Zoyaat and about her engagement. Her son is shocked to hear this and then laughs. His mother asks what happened and he says that when Junaid At night, Zohia’s mother tells Junaid about Zohia’s ripeness. Hearing this, Kuroh gets sad and goes to the roof after congratulating his sister. When he sees Zohya standing there, he goes to her and holds her hand and says that you have rejected the relationship. Why didn’t she try to get rid of him