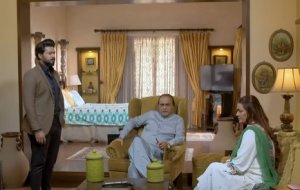 At the beginning of the drama serial Badzat Episode No. 28, Mahwish goes to Beha’s room, then Beha stands up.

I made a big mistake that you both felt sorry for mother and daughter. If I had known, I would have picked her up and thrown her out on the first day.

Mahosh says that it was as if a stone had settled on my intellect. Why do you believe? My son was found to be a fool. My son has become homeless because of you. Hey, the witch also left seven houses and attacked.

She wanted to get her point across by trapping her innocent corpse. She wanted to use it against Daniel. Beha says Aunty Aisi is not talking about this. Daniel has made false accusation. Is being humiliated and is being kicked out of the house.

Mahosh says whatever it is my son has gone because of you and you will bring it back On the other hand, Norman tells Akbar Hussain that my son did not come home all night

He takes everything to heart. Akbar Hussain says when you called him, Nermain says what happened, but he did not answer the call and how much he was convinced, but you did not listen to Daniel.

You know how much he’s hurt, my son Akbar Hussain says if you somehow call her back home then Nermain says as long as this wretched girl is in this house then no images come back

On the other hand, the guardian sees why Aini was with Daniel. At the same time, Anas comes and says that it is the call of Mahosh Aunty. Talk to him.

Willie says Daniel is using my sister against me to get revenge, so he has made a very ugly accusation against me and his wife too. Beha is his wife.

When Aini starts to walk away, Wali grabs Aini’s hand.Aini says leave my hand, otherwise I will call the police and media and I will kill you in a way that you can’t even imagine.