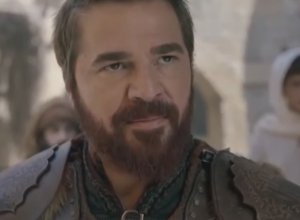 In the drama serial Barbarossa Episode No. 28, Baba Urooj says that Pasha,
I will not leave you, you shot my brother in front of me.
Why did Ilyas kill my brother? From the other side, Kamal Urooj calls out and says Urooj stop.
Urooj says no, I told him that.

We have to wait for Khizr to come. He harmed my brother Ilyas in front of me.
At Kamal’s request, Uroog stops and they take Ilyas from there. Say no,
then why did you do that? Pasha says what Ilyas did, he ran away from our prison and
took others with him. You don’t know. Now the prince’s order is

As soon as Ilyas regains consciousness, he should be brought here.
Urooj Baba is standing outside the door very worried.
Then the soldier comes and says, O Urooj, don’t worry. Ilyas is coming to his senses.
We will inform you, Orooj from there. Ilyas goes and opens his eyes,
so Baba tells Urooj as a soldier that Ilyas is now out of danger,
so Baba Urooj is very happy.

And Ilyas comes quickly and asks how my brother is doing.
Ilyas says I am fine, my brother.
Ilyas says that Kamal has been sent a message by the prince that
he has received an order to open my eyes and present himself to the prince.
Baba Urooj takes Ilyas from there. Kamal gets the news that Ilyas is out of danger,
so Kamal rushes to Ilyas’s room and sees.

And there is no one there, Kamal says Uroog has taken him.
Kamal reaches this cave while looking for Ilyas, then Baba says Urooj,
I am here, then Kamal says, you know that the prince has ordered that
Ilyas If you have to present it to him, Urooj Baba says,
I will not hand over Ilyas to you until Khizr comes