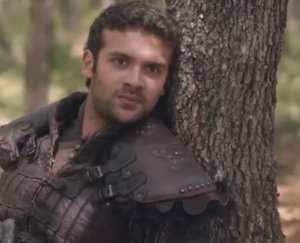 and they say that where is Ilyas, they start looking for Ilyas,

then a soldier comes and tells that Ilyas has gone to Jazire and Diya Ngo has attacked,

so Baba Uruj and Khizr are very worried.

And they quickly go towards Ilyas, Baba reaches the peak and he sees that Asma and

Ilyas and many soldiers have been killed Baba Urooj comes to Ilyas and says,

I have come to my lion, I will take you to the doctor, you will be fine.

So Ilyas says, “Dayango killed my Asma in front of me,

Ilyas Kota Mey Agha make your right lawful over me,

I also make my right lawful on you.

Ilyas and Asma die and Dayango is preparing to kill Urooj Baba.

When Dakhar reaches there, Baba Uruj says that he does not take me to the doctor,

take me to the sea, no doctor has the cure for these wounds anymore.