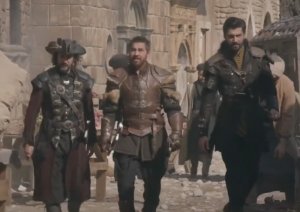 Urooj Baba says that we will not have to catch Shahbaz in a hurry.

He goes out to find Shahbaz, but a soldier comes and tells him where

Shahbaz has taken refuge. I know. So Urooj Baba says that let’s go quickly so that

they don’t run away from there So Urooj Baba and the soldiers are going towards Shahbaz,

then Shahbaz’s men attack Urooj Baba and the rest of the soldiers,

Urooj’s soldiers are busy fighting with them and Shahbaz runs away from there.

A girl comes and sends a message to Shah Sanam’s sister that Shahbaz’s residence has been found out,

Uroog is going here and Shahbaz has gone to the ship and has a message.

You also come there, Shah Sanam says whatever happened wrong,

it didn’t happen. Maryam sees Shah Sanam talking and says to a girl that you go and tell Khizr about Shahbaz Jahaz.

He has gone to the side On the other hand, Urooj Baba and his soldiers go towards Shahbaz, then Shahbaz has laid a trap.

As soon as Urooj Bab and his men reach there, Shahbaz’s men attack them in a very fierce battle.

As many of Shahbaz’s servants are killed, Shahbaz watches

Then he said that I will finish them and he took out his gun and shot and killed Urooj Baba.

Meanwhile, Urooj’s friend quickly said like the black sea, he is coming and he was hit by the gun.