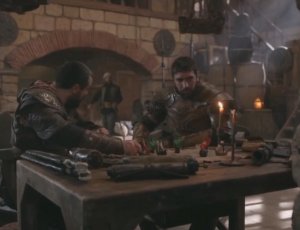 says we will have the ship ready by tomorrow and they will not be able to attack us.

When they start, Shahbaz comes, then all the water in front of him is water in which fire is burning,

and there is a man sitting on the stones. Then he runs and comes to him and says you have given fire to me

and I will kill them all, Shahbaz says.

I have destroyed their ships, now they will not get any help from the sea,

he says, I will kill everyone, no one can stop the fire of hell.

Khizr and his soldiers are sitting here talking.

Hain soldier says I am worried Shahbaz is still in his post and Pasha asks Shahbaz for proof.

Shahbaz will definitely do something wrong while in his post, Khizr sa

We will win this war and give Naseem Pasha against Shahbaz.

While they are talking, a soldier comes and says that our spy has told us that footprints have been seen near the ship.

Shahbaz attacks their raft and they kill a soldier. If they are, Nico comes running and asks you if you don’t,

then you say the river of hell and you can’t stop it.

Nico tells his soldiers that if you attack, he will kill everyone.

All his soldiers are killed