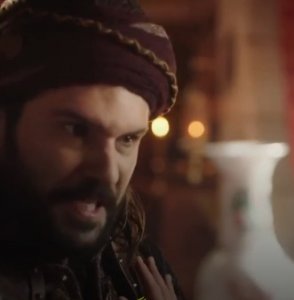 At the beginning of the drama serial Barbara Busa episode number 35, episode 2, you will see that Darwish and Barbara are sitting in a boat and talking.

Darvish says repeatedly, “Sometimes my heart is troubled. I think I am not as strong-willed as Arwaj,” Darvish says.

There is strength in the will, Darvish says, take the help of Allah in your sincerity, strength is where the heart is.

And that heart preserves faith and strength, as long as you have this hope and faith, neither your fear will find place nor your pride, says Darvish.

All this will pass, so he repeatedly says Insh-i-Allah.Inshallah, while they were talking, Aydan comes and says Assalamu Alaikum

The dervish and again and again give him what they are now giving, and peace be upon him,

Islam says again and again, Ma Rasila, then Ma Rasila says, I do not go.

How can your men do this and yet they succeed in sending Pedor? Marcela gives a letter to Khairul Din

The dervish asks what is written, and Khairul Din says that there will be a fight between Charles and Francis.

Who will be destroyed now? Khairuddin says this is a good thing.

So we want to convey this news to our Sultan as soon as possible.

Come tell the sailors to lower the Venetian flag To wave at us we are going to our sultan.

My sister don’t worry, keep them in good boxes. Siya says there is something wrong with you, if you solve this matter well.

And I didn’t complain about it to Kemanx Pasha and he said ok, neither did I.

The husband says you are a fool Do you think I did this because Kamala Pasha ordered me to do this?

Siya says so why are you doing this? Marad says.