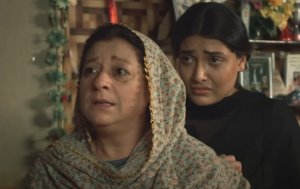 At the beginning of the drama serial Bakhtawar episode no.1,

Naseema and Bakhtawar are talking to each other that Bakhtawar’s
father comes and gives a red suit to his daughter.
Getting dressed tomorrow is your marriage with Mushtaq

Go wash your face and come. Bakhtawar says why is my only friend’s wedding.
Her mother says, if your mother sees it, she will make a joke.
Bakhtawar doesn’t listen to her mother and goes to the wedding.
She collides with Ahad and Ahad looks at Bakhtawar very carefully and Bakhtawar leaves

Bakhtawar’s mother is sitting very worried, so Bakhtawar asks what is going on, mother,
she says Gudu’s medicine is over, you should increase the tuition fee. Ki’s mother runs away

And she calls Gudoo, what happened,
but Gudoo is dead, the whole community gathers and says that now they have no support,
so when will Bakhtawar get married? marry
His mother-in-law tells him that tomorrow is your marriage. Bakhtawar and his mother sit in the car to go to Karachi at night with my son.