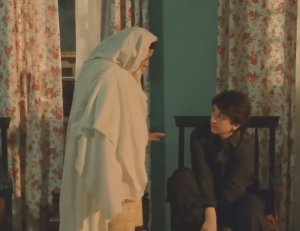 In the drama serial Bakhtawar Episode No. 4,

Dilawar’s father gets a call that Dilawar has been shot, you come to the hospital quickly

Dilawar has been attacked and he has been shot, so his mother says how dilawar i will also go together.

His father says that first I go and see where Bakhtu’s mother is waiting for Bakhtu.

Bakhtu has not come home yet, his mother is very happy, in such a short time Bakhtu’s mother also comes,

on the other hand Dilawar’s father reaches the hospital and calls Dilawar who has done it.

All this is said by the doctor that he has become weak due to excessive bleeding,

now it has been saved that someone has tied a bandage on his arm for time,

while Bakhtu’s mother is crying that where was you worried,

Bakhtawar says that she was in the police station.

His mother is angry and asks why all is well, Bakhtawar is busy in his work,

his mother says that you know, not my Bakhtawar says except you, I tell you.

All Bakhtawar tells his mother that someone was shot on my son,

so the police took everyone with you, I told the whole truth,

so they did not say anything to anyone.