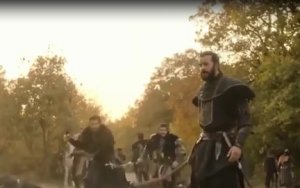 In Alp Arsalan episode number six, some people started to think that our army numbered only twenty thousandAnd compared to us, the number of the Roman army is 600,000, so our sultan is not coming in front of his army

And he didn’t want to start a war because the sultan’s army in front of his army was becoming a bad place for the soldiers.
The commanders of the Muslim army who were standing were strangely sometimes looking at the enemy and sometimes at the camp on the back.
The sultan was waiting, however, on this occasion, a very strange situation arose, and the Roman legions were shouting loud and enthusiastic slogans.
Now you were going and there was a kind of indecisiveness because from Aam Shukri to the big chieftains were standing in front of the army.
They anxiously awaited the arrival of their Sultan. The Muslims did not believe in the lack of numbers and abundance of the army
But if they are in front of the sultan, they will also be hit by a storm.Rather, it was the absence of their Sultan that suddenly there was a wave of joy and satisfaction in the army of Muslims