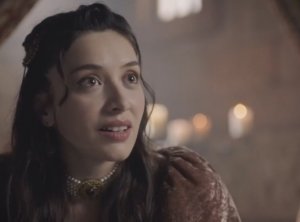 At the beginning of the drama serial Alp Arsalan Episode No. 35 Part 2, you will see that Alp Arsalan saves his soldiers.

Unable to get up due to illness, Alp Arslan cuts the noose around the neck of one of his soldiers and then falls.

Alp Arslan’s other soldiers come and the soldiers together save the rest of the soldiers as well. Governor Gu is one of Igor’s soldiers. Alp starts killing Arslan.

So the emissary or woman sitting on the tree rains arrows and she kills every servant who comes towards Alp Arslan.

Alp Arslan, seeing the ambassador shooting an arrow, says, Ambassador Ya, one of Alp Arslan’s soldiers sees him. Go-runner Gri Yegor says, “Curse you.” He tells his soldiers.

He tells all the soldiers, dead or alive, to attack them. Alp Arslan and his soldiers fight together.

And they all run away, and Malik Sultan is left to hide in Governor Gregor’s daughter’s room.

Governor Gar Yegor says to hurry and find him, he is still in the palace, he is here

Come find him and search the whole palace. Everyone starts looking for him. Malik Sultan comes out of Flora’s room.

To search Flora’s room, Flora comes in and says how dare you search my room.

Alpa Gol signals to the sultan, let’s go and find another place.

He is unconscious, Zahir had a lot of influence on him, he can’t even speak, he says, Ambassador or lady, why are you following me?

So you risked your life for me Alp Arsalan says if you would have let me die you would be free ambassador or says I will be free anyway.

If I don’t want to be free, then there is no need for him to die.Alp Arslan’s body has a lot of poison in it