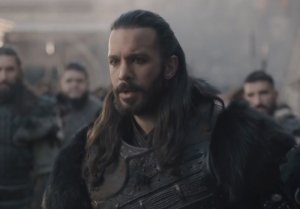 At the beginning of the drama serial Alp Arsalan Episode No. 34, Page 2, you will see that Alp Arsalan comes to attack Sarmani.

He enters all the soldiers, there is no one there, Alp Arslan says back off, it’s between us as they all start to go back.

And the gate of the fort is closed and as Alp Arslan comes to the gate, the governor is standing there and the governor says, “Now you have no way to rest your arms.” To take

You cannot take what is mine, there is something else that is very good. Arrest the two soldiers of Alp Arsalan who are with the governor and bring them to Alp Arsalan. Or go

And then these two nine soldiers are killed with Alp Arslan. The governor says that if you don’t surrender now, many of your soldiers will be killed.

Ata Bey says that when we come back, we will also kill the person who gave you this news.

“Who told him what?” Gour Nar says, “I don’t know you. How can I believe you that Alp Arsalan will attack Sarmani?”

Now Alp Arsalan will die, he also says in the hands of the governor, he is very surprised and says, what have you done, you have ruined my whole game.