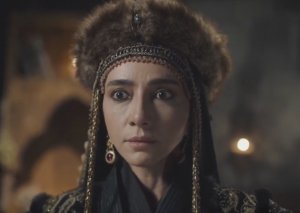 you will see that Alp Arsalan is sitting in his room and talking.

When a soldier comes and says that Arsalan has regained consciousness,

they all go quickly and ask him.

And on whose request they wanted to kill Arsalan,

they were very afraid and said that he had come to kill the ambassador, not Arsalan.

I wanted to kill him, he is a dog, why and at the request of whom,

Alp Arsalan, who is surprised that he is doing this with him, says that until the truth is known, the rooms will not go out.

Ahina L is locked in the room, she is very loud that she is innocent, she has not done anything like this.

Alp Arsalan and her sister are talking.

That I know everything, you are innocent, but we have to do this to know the truth,

then Anil also understands, then she tries to escape from there.

And he realizes and he runs away, he is on the way to be attacked.

My life is in danger, that’s why I came here to you. The governor is very happy.