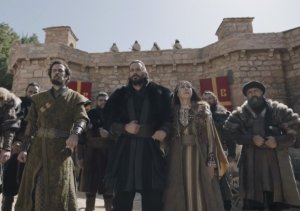 In the drama serial Alp Arsalan Episode 31 Part 2 you will see that the governor invites Alp Arsalan and does not want to be friends.

They are served food and Alp Arslan says to talk about work and on the other hand Zara,

the maidservant of Spire, Alp Arslan’s sister tries to kill everyone as if they were all asleep. Is

Zara takes a dagger in her hand and starts to kill him, then Kamal’s wife Yake Kha comes in and holds Zara’s hand and keeps it alive.

Khatun comes to keep quiet and says if Alp Arsalan comes to know about this, he will not let you go alive.

On whose request are you doing this? Zara says I will kill myself by killing him. Come on, wife. She says you are so faithful.

and now I will not allow Spireya to marry a Salju Qiya.

She has lived the life of a prisoner all her life,

I will not let it happen, so you come and say,

I don’t want this to be a marriage, but you are very brave, your mind is very limited.

She says to Dara, if you want your relationship to be a secret, you will do what I want.

In Vaspur, Gournar is not getting drunk with arrows. Alpa tells Gol that I know you are one.

And he takes the bow from the governor and does not shoot the arrow and says I have a lot of hatred.

I have done so bad with you Alpagol says I want to stay with you then Governor says.

If Alp Aslan is killed, what do you think will deny his desire to sit on the throne?

Even after Alp Aslan, there is no such powerful person who has the courage and strength like Alp Arslan.

So the Go-Runner watches the Alpa Goal very carefully

In Vaspur Akan, Alp Aslan tells Alpa Gol’s mother that the sacrifice your son Alpagol made will be remembered by Akan.