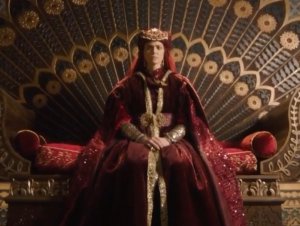 Everyone calm down Alp Agul calm down too Maria you drop that dagger immediately if you want to keep the governor alive take Alp Arslan out of the castle for God’s sake we are in the church God’s house I am you have been raising snakes for years
Kika Manos Maria, you will pay for this. Let me go, I won’t say it againIf you want to live to punish me, order Alp Aghut to let Alp Arslan go. I won’t say it again Alp Aghut.

If you leave him, he said, “Maria should leave you first, otherwise I will not leave her. Everyone, go out. We are going to the gate of the fort together. Let’s go ahead.”
Wait, listen to me carefully until we get rid of them. Now, Alp Aghut, I have told you not to try to stop me
Sir, everyone stay in your place, don’t come any closer, don’t worry, it will be fine, Alp Aghut, I told you not to try to stop me, your revenge has blinded you.
I’m not familiar with Andha, but you are. If you think there is any value in our being together for so many years, then listen to what I say. You have to leave here safely.
If you follow my words, Kika Manos will trust you more than ever. I don’t want him to trust me. I want him to die. Do you understand that you just want to ease your heart? What do you feel after killing Ma Nous?
that they will let you live let’s agree who do you think will replace Kika Manus after killing him and we will be able to live with him as we live with Kika Manus
Think of all this if you will. Al-Arslan has a plan. He will come to the castle to get you. I will reduce the number of the army under the watch of Syria. When the bells ring for the protection of Syria, I you. I will never harm you
This is what I have to do to make Alp Arslan trust me I will tell you everything Trust me Open the doors Don’t try to move What are you saying Ameer Gazar your faithful friend Memon was your helper
Do you believe that he is a traitor My Moon was my right hand I trusted him without any fear Is not the fire of temptation best in the shadow of trust I did not know in my negligence that he was a traitor
That he is a traitor and you know Alp Arsalan’s attitude towards traitors, he is not wrong, he will live to forgive, Alp Arsalan sir is angry, he will demand a traitor from these people.
If they do not give them, they will endanger themselves by doing something unexpected and will make it difficult for the Seljuk state, but if they go and take Na Saq first, neither will Alp Arslan. Sahib and neither Saljuq nor Ghazna state will face any problem
You are right, Amir, go and fetch that treacherous dog.Don’t do what you ordered, don’t see how we soldiers look ashamed in front of people, open the door, we have come, we will go straight into the forest, no one will follow us.
Alp Aghoot remember something don’t come now we have reached the forest we will leave at the same time are you ok I am ok Alp Aghoot are you ok now lady I am ok