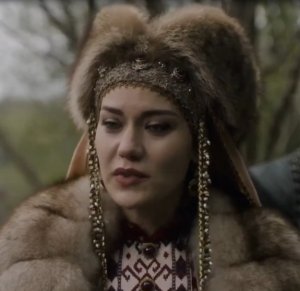 Alp Arsalan Episode 12At the time of the universal conquests of the Muslims, the borders of the occupied Islamic territories were mixed with the Bodobash areas of the Turks, so these people often interacted with the Muslim traders.

Under their influence, Islam began to spread gradually among the Turks and they began to adapt to the mold of civilization, thus whichever tribe of Turks accepted Islam would remain on the Islamic borders.
These people are generally called Turkmen. After accepting Islam, the area in which the Seljuk Turks settled was under the influence of Begu, the king of the Turks, and this kingdom of Begu is called Turkestan.
And since the Seljuks had come and settled in the place of Jund, and the king Begu of Turkestan used to receive tribute from Jund, but when the Seljuks came and settled in the place of Jund, the men of Begu, the king of Turkestan, demanded tribute from them. The Seljuks had accepted Islam
When Begu’s men came to Saljuq, the chief of the Saljuqs, to receive the tribute, he flatly refused to pay them tribute, and said to them, “As long as we have life and as long as we breathe.” Until then, the infidels cannot take tribute from the Muslims
On this, the men of Begu, the king of Turkestan, agreed to the war, and the Seljuqs and the neighboring tribes also took up arms, thus a terrible battle took place between the Seljuk Muslims and non-Muslims.
By which the Muslim Turks defeated the non-Muslim Turks and drove them away from there, thus the Muslim Turks won and the non-Muslim Turks faced failure.