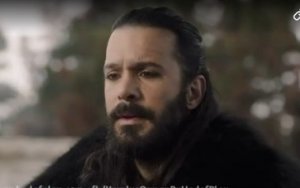 At the beginning of the drama serial Alp Arsalan episode number 40 part 2, you will see that Alp Arsalan is coming with his friends.

Alp stops when he sees that priest Sahab is coming from Sa Mane and Alp Arsalan says I am seeing a dream again today.

If this is the truth then the priest says you will see the truth and then Alp tells Arslan that the governor has kidnapped the ambassador or the lady.

And that’s why you have been called, you need to be very careful Alp Arsalan says how did all this happen Apadri says

And that’s why you have been called, you need to be very careful Alp Arsalan says how did all this happen Apadri says

So Jalal goes to meet him and Basa Seri tells him that if you hug me in the manner of killing me, then no one will suspect.

Jalal does the same and begins to beat Siri, but at the same time a letter is thrown around his neck and the rest of the soldiers come and catch him.

Don’t put us in trouble. When Jalal leaves, Yanal asks Basa Siri what is going on here.

So Basa Seri begins to fall on the one on which it was written that I will come in the morning.

So Governor says I don’t even know how I fell in love with the enemy’s daughter and I knew you would definitely come.

In order to save Ambassador Ya, the Go-Runner pulls out one and says

In order to save Ambassador Ya, the Go-Runner pulls out one and says

Put a seal on it saying that the fort is mine or else I will kill your wife, the ambassador says, “No Alp Arslan, you won’t do that.”

Too many lives have been lost to take it, don’t seal it, then Alp Arslan looks at the priest.

And moving forward to seal, he quickly draws his dagger and places it on the runner’s leg, and a few other soldiers also move.

A soldier disguised as a beggar quickly puts his dagger to the head of the governor’s son, Alexander, and calls out to Alexander the fearless.

“Why are you doing this? You are a beggar,” he says.

I am a beggar, I do not earn, fearless Yasin Alexander is very confused, says Alp Arslan.