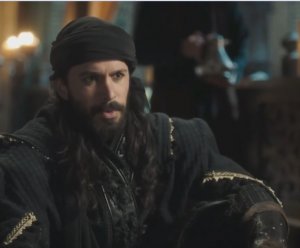 In the beginning of the drama serial Alp Arsalan Episode No. 38, you will see that Alp Arsalan falls unconscious and Arsalan Basa Seri captures him.

And Gurnar sends a soldier to Yegor and says that I have captured Alp Arslan, you quickly bring your soldiers.

Alp Arslan has been captured by me. You quickly bring your soldiers.The condition of Chaghri is very bad now, the sultanate is in trouble

As for who caused this situation, the soldier tells that Arsalan Basasir has told Sultan Ter Ghul that we should not leave quickly.

So Ana Lisa Hab also starts to go, then Sultan says you stop here, you are not going with us and he says where are Akana’s parents then Alpa says

That she was injured in the bomb blast, that’s why she is not here.In the meantime, Akana’s mother comes and the sultan is shocked

I have told you that you will not go, so he says, Sultan, I will go ahead and ensure the way

So he says ok. On his way to Anna, he meets a man on the way. He says help me.

So Enal stops when he comes to him and says Arslan Basa Seri has captured Alp Arslan.

And he has taken her to the East. Enal hastily meets Arslan Basa Seri and says:

And you won’t be able to take Alp Arslan away, as Gurner Gregor arrives with his preparation. Lip Arslan is imprisoned.

To see, the male reaches in and tries to hold her, but Alp Arsalan grabs her hand.

Whom the governor pulls out with difficulty, they are all busy in their words

That some soldiers along with the governor killed them all and took away Alp Arslan on the order of the priest.

After some time Gurnar regains consciousness and asks what happened here when he wakes up and sees that Alp Arsalan is not there.

And Alex the coward’s earnings slapped the coward