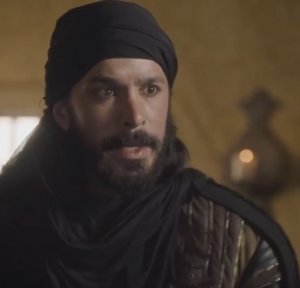 In the beginning of the drama Serial Alp Arsalan Episode No. 36, Part 2

, you will see that Oqe Khan says that the ambassador or Khan, who is not on the throne, does not want to be in prison.

Batog Khan says that you will have to go through Mir Lash before you can put Safar or Khan in jail.

Arslan uysuf talks to the ambassador, saying, “What have you done? You have ruined my whole project.”

If you are responsible for the death of my commander, then Safar or Khatun says that earlier I was proud that I am the wife of Alp Arsalan.

But now I am ashamed of what you have done.Arslan Yusuf slaps the ambassador or wife hard on the face and the ambassador says that you are crossing the line.

Arslan Yusuf says I will do and I will do whatever I can.They are talking when Zareen comes, she says you are being teased.

If she goes on a trip or hastily, then the wife and everyone talk together.

What was the purpose of the police? She says, “I didn’t come.”

A soldier comes and says that Governor Gregor has come, so his wife says why is he here, ambassador or says

All of you go and send the governor, Oke Khan says whatever you talk about.

Shafir says very angrily, “If you don’t go, then I will expel you.” Al-Arsalan is in Baghdad.

Alp Arslan is only from Syria.

What does he do to make him believe that he is the fearless greatness of Egypt?

But Basa Siri gets suspicious that he is not. Basa Siri says that Pup has come from far away.

You are my guest. Today I will entertain you. You have come from a long journey

So you need to rest. Alp Arsalan is making a plan like this. Take out the original stone of Hajar Aswad.

And keep the stones so that Basari doesn’t even know Alp Arslan keeps Busari involved in things.

And they take out the original stone from it, then they hope that the work is done