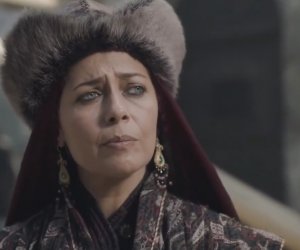 In the drama serial Alp Arsalan Episode 29 Part 2, you will see how Arsalan Yusuf’s

daughter attacked Alp Arsalan and injured him. They don’t even say and come back

When he comes back, everyone asks what happened. He doesn’t tell anyone.

Meanwhile, Arslan Yusuf finds out and gets very angry.

And he says to his daughter, “You don’t want me to leave here and save my life.

” Arsalan Yusuf’s daughter says, “He will never marry me because of what I have done,

Arsalan.” He gets very angry and tells his daughter Spiria

That I have the right that if Alp Arslan obeys the order of his Sultan and decides to marry you,

I will definitely marry you to him to free myself. Alp Arslan goes to Goor Narpas and says,

Is it written in your holy book that you eat people’s wealth and oppress them?”

So the Governor says that I did not oppress anyone and I did not steal anyone’s property,

And I made an agreement with him and you kept their property and did not return the whole property to them,

so the governor says yes, what is it? Alp Arsalan says either return their property or else.